Orthotics can relieve pain sans foot surgery for Lansdale runners, that’s what the New York Daily News’s Running Doc asserts in his weekly column. The article answers the concerns of a 57-year-old overpronating runner with runner’s knee who was advised not to use orthotics by her coach:

“Overpronation is due to the feet your parents gave you …. Runner’s knee pain with the symptoms you described is due to the kneecap tracking laterally due to overpronation and a weak VMO (medial quad). This lateral tracking causes the kneecap cartilage to wear down, be sore when the quad contracts … and it weeps fluid ….

The good news is that if you correct the biomechanics of the tracking, the cartilage in the back of the kneecap will self-regenerate and heal within four weeks. The bad news is that you can be coached, trained, and exercised from now till doomsday and when you get back in your “zone” while running, you will revert to the overpronation of your feet that your parents gave you. … You need an orthotic to correct you so you don’t have to think about it at every step.”

The article notes a very interesting fact that coaches often miss, or otherwise dismiss: overpronation is a completely natural condition and is practically impossible to eliminate, short of altering a person’s body structure through surgery and that is almost never recommended. 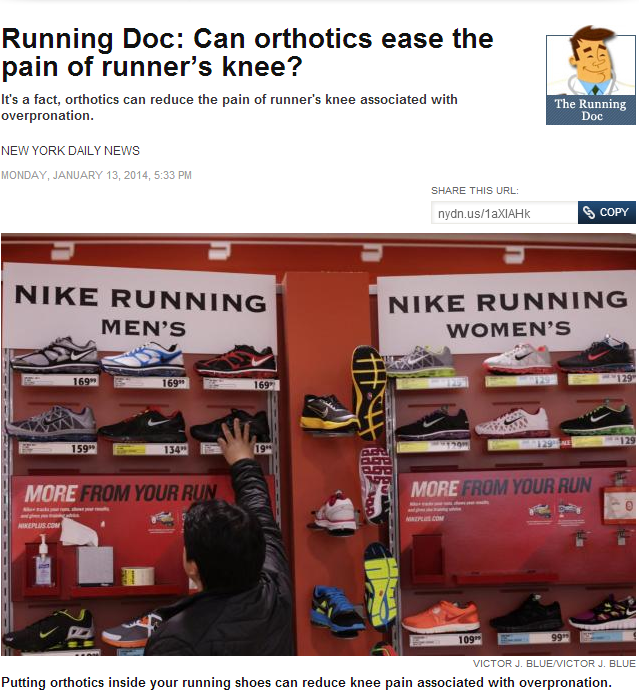 Training can only do so much to correct overpronation, and if it does, any corrections can only be maintained while the person is thinking about proper form. This detracts from the runner’s ability to maintain peak performance because it redirects the mind away from that region of Zen every athlete tries to enter into to go on further, move faster, and for longer, “the zone.”

Runners who want retain their ability to enter “the zone” will want to consult a trusted Lansdale podiatrist, like the doctors at Wachtel Family Foot Care, for advice on choosing an orthotic. Using computerized gait analysis, these doctors can recommend, or design, an orthotic that will help a runner achieve perfect running form.