Patients may say they have pain at the bottom of the foot and inside of the ankle that they characterize as burning, shooting, searing, stabbing, tingling or numbing. This pain is aggravated by activity and relieved by rest. Other symptoms of tarsal tunnel syndrome include, tenderness with palpation over the tarsal tunnel, sensory loss in the areas that the posterior tibial nerve supplies, hammertoes, and muscle weakness and atrophy in severe cases.

You need to see a foot doctor in Lansdale immediately if you believe you are suffering from TTS. Physical and biomechanical examination, nerve conduction studies, and x-rays will help your doctor arrive at a definitive diagnosis and determine your condition’s specific causes. Depending on its severity, the doctor may recommend conservative treatments such as rest, ice, physical therapy, braces, footwear changes, anti-inflammatory medications or injections, and prescription orthotics.

Following surgical correction by a podiatrist in Lansdale or other boroughs in Montgomery County, Pennsylvania, patients may have to wear crutches with no weightbearing involved on the affected foot for four to six weeks. Dr. Jeffrey Wachtel reminds patients that it’s possible for TTS to recur. 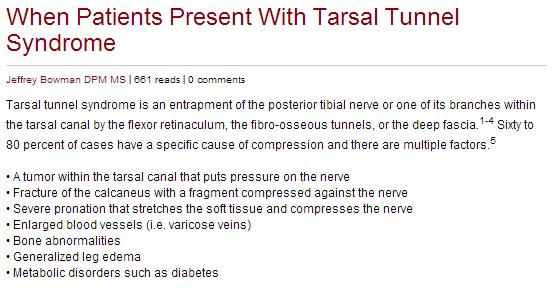